- added the ability to cancel automatic text corrections, for example, if you do not want a capital letter after the point, then you can undo the last action and get the option without correction;
- added the ability to set the header and footer for the script (Research - Script - Header & Footer);
- fixed the problem with a template used for exporting, when the template in which the script is exported did not similar to what is shown in the export dialog;
- improved work with file names in Windows;
- added checking for the ability to write into opening files. Now, if a user tries to open a read-only file, the program will warn about this and block all editing abilities so as not to mislead the user;
- the size of some dialogs of the program has been adjusted so now it can work fine on old netbooks;
- added undo and redo buttons to the research module documents editors;
- the "Versions" section has been improved, now it is possible to create new versions and view the text of the script of the saved versions right from it;
- improved export in the DOCX format in such a way that now the numbers of the scenes will also be located on the side of the text itself, which will allow better orientation in them;
- fixed the problem with the export, when formatting was simultaneously applied to the text of the script and its color was changed;
- fixed a problem with the import of documents, when some text was imported as a review mark with black background;
- fixed problem with calculating the percentage of rarely used blocks (for example, title);
- added spelling dictionary for the Catalan language.

And of course, we have added an indicator of the progress of our campaign, so you can follow our movement to the goal and participate in it, right from the app! 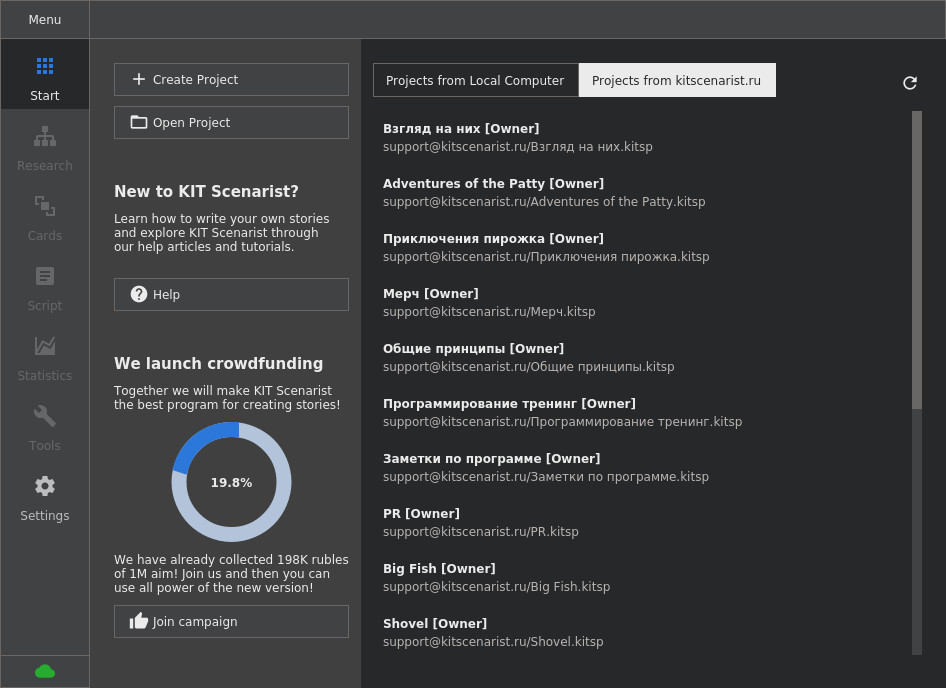 Interesting experiences now evoke the development of the current version - it is very pleasant to return to work on the program itself, but in addition, there is such a mixed feeling of sadness and joy. You know, this is how, when the next series of the Game of Thrones comes to an end, you are sad that it is over, because you have already walked the whole path with it and are between you so much, but you are happy that it was only the first series of the eighth season and ahead so much more will happen that it is simply impossible to sit still and you want to see the next part as soon as possible!

I really hope that the second season of our saga will be no less epic than the first. But to give him an explosive start, we really need your help! Join our campaign! Together we are able to create the best program for authors!

Will the current version discontinued? I'm struggling to choose between a donation and backing the project up but I'm more an enthusiast than a PRO and I'm really short on funds. Sorry for the annoying question.