And in it:
• improved synchronization of research documents in the cloud service;
• fixed the problem of closing the save file and open file dialogs in Mac OS X when working with cloud projects;
• fixed the problem with the fall of the program when switching between mind maps in research;
• fixed the problem in the work of hot keys in mental maps;
• fixed a lot of bugs in the cards due to which there were "ghost" cards, fixed problems with undo and redo, the cards disappeared, etc. If you had same problems with your projects, in order for the cards to work normally, you will have to create a new project and put a script into it;
• fixed a problem with export to MS Word, when review marks contain links;
• fixed the problem with displaying the current script editor template, in some cases, it was displayed incorrectly;
• the double dash is no longer emphasized as a spelling mistake;
• now when importing, app checks that the imported file exists and not empty, if something went wrong, the import is interrupted;
• added processing of the case of merging characters: if you decide to merge two characters into one, you can now change the character's name to the desired one and two characters will be merged into one, descriptions of both characters are also merged;
• have been added translations to Farsi and Chinese.

Also, we signed Mac OS X version, so, now it should allow using application without any restrictions.

I wish everyone a nice day and a sunny mood!

We have a lot of news today!:)

First, the event of the day - the version for iOS has already been approved to the AppStore and it is available for download! It turned out that Apple has recently switched to accelerated application reviewing and now it lasts not 2 weeks, but 1-2 days! So guys, who were waiting for this moment - he came! I'm very happy and congratulate all of us on the release of the KIT Scenarist version for iOS!!! 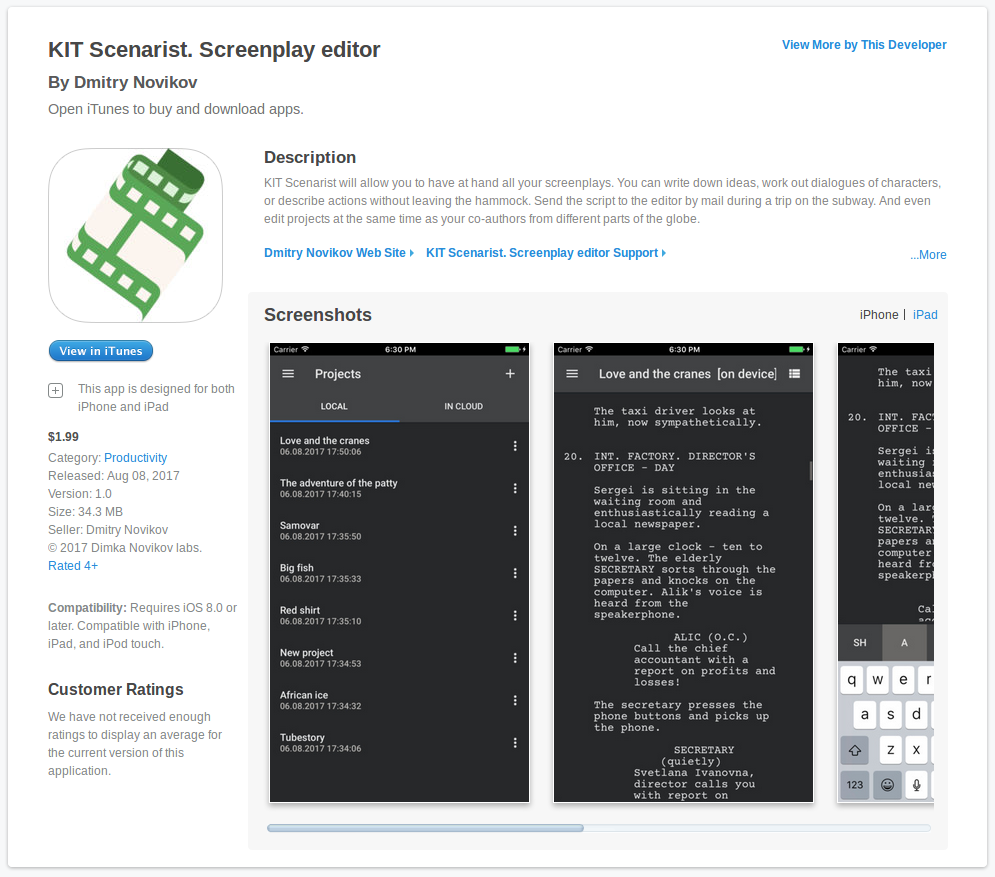 Next is not very good news - we have got a mistake with the cost of the application, it turned out that in the AppStore we can not set the price yourself, and we can only use default price grids, as a result, the first version for iOS will cost not 99, but 149 rubles, I apologize for my ignorance in this matter, in the future I will be more attentive.

The next news about the Android version. Today, we published an update that fixes program crashes when importing scripts from Dropbox in some cases.

Well, the latest news is dedicated to pirates and those who decide to use their services. We got information that the apk-files of the Android-version appear on the network. We were ready for this, so we decided to present you a gift - a version of the program which wasn't installed from the Google Play Market, will continue to work. Except for one small nuance - sometimes the program will delete a random script from the phone. Be ready, pirate life is full of dangers !;)

So, this is the link to download iOS version from AppStore.

Have a good day, my friends!:)

And here is the first update of the Android version with fixes of detected errors!

What's improved:
• fixed the problem with importing in the case when the app was closed;
• parentheticals will now begin starts with a lowercase letter;
• added support for older versions of Android (now the minimum version is Android 4.1);
• minor improvements to the interface.

You can dowload app by this link from Google Play Market.

A lot of time has passed since we started working on a mobile version, but it's time to share the first results of this work. Happy to introduce you to the Android version! 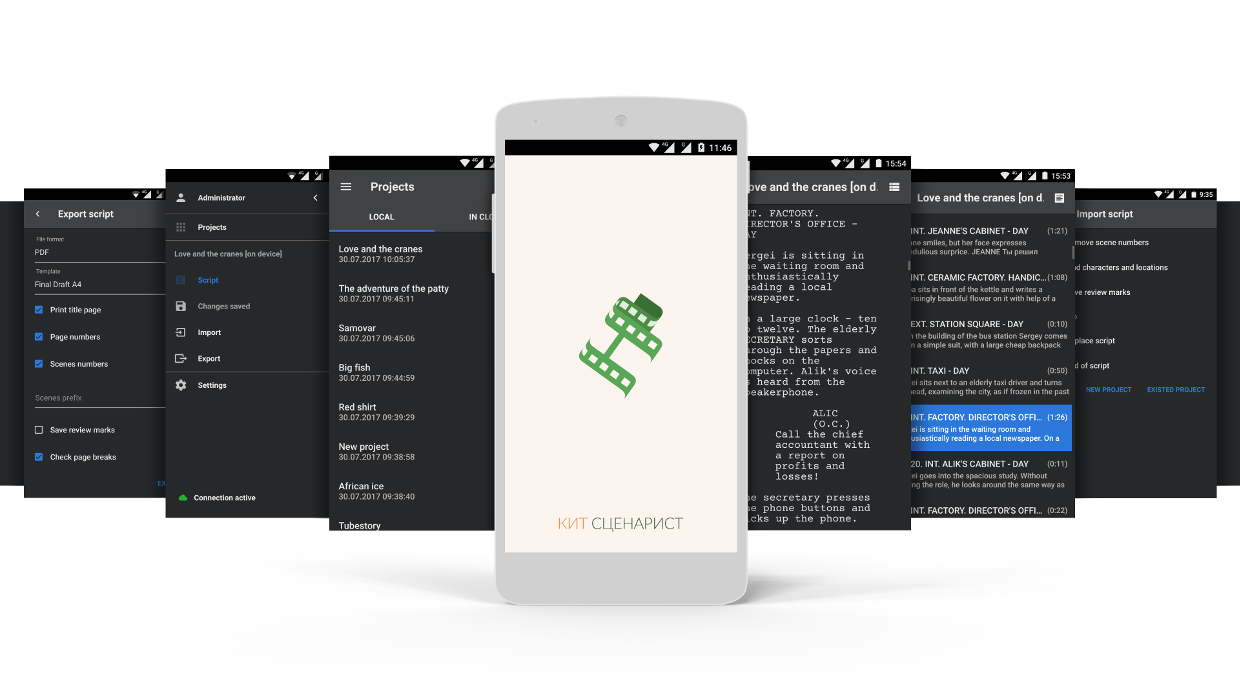 The first version includes next features:
• creation of projects on the device and in the cloud service;
• viewing screenplay text and editing it in accordance with industry standards;
• view the list of scenes and navigate the text of the script;
• import scripts from the fdx, fountain, docx and kitsp formats from any installed application;
• export scripts to pdf, fdx, fountain docx and kitsp formats in any of the installed applications.

The first version is not yet complete. In the next month or two, there will be a few updates that will add, at a minimum, a built-in help and an opportunity to edit title page.

Like I said before, the mobile version will be paid. Starting with 99 rubles.

You can download the app via https://play.google.com/store/apps/details?id=pro.dimkanovikov.kit.scenarist or you can search the Play Market on our application name.

Well, as usual, guys, if you see any problems, glitches, bugs, or suggestions, I'm ready to discuss everything and make the app even better.

P.S. Version for iOS in work and we really want to release it as soon as possible. So don't worry, folks, it's near to be done.