We released the next beta version of the KIT Scenarist 0.7.1 beta 7.

This is the latest beta in the current development branch of the project. I plan to allocate another week or two for testing and moving it into a stable status.

And afterward, I'll work hard on mobile applications! Have a nice weekend, guys!:)

I hasten to inform you that we found a mega bug! Because of it, the texts in the cloud collapsed, the cards on the blackboard disappeared, undo and redo were unworked ... But! With your help, we found problem and it has already been fixed!

To all who put the version of the program, starting from 0.7.0, I recommend installing the update for save the future of your work!

In addition, the sixth beta fixes the problem with the hang of exporting text in Windows.

Thanks, guys! Together we are a force!

Finally, I found some time and prepared next update for you. KIT Scenarist 0.7.1 beta 5 released!

In this update I fix some bugs related to cards module and made some other improvements:
• fixed bug with losing stamp in cards;
• new cards now added not after the last card, but after selected card, or in mouse double position;
• fixed bug with loading dictionaries spell check for Windows and Linux;
• card's titles now printed identically with cards on the screen;
• in research module, after adding a new item, an application will be focused on the added item.

So we are still a few steps closer to the release of the stable version. Once again I want to express my gratitude to all of you! Thank you for participating, friends!

Start of open beta-test of cloud service in version 0.7.1 beta 4

We released KIT Scenarist version 0.7.1 beta 4. It includes the ability to check and install application updates. 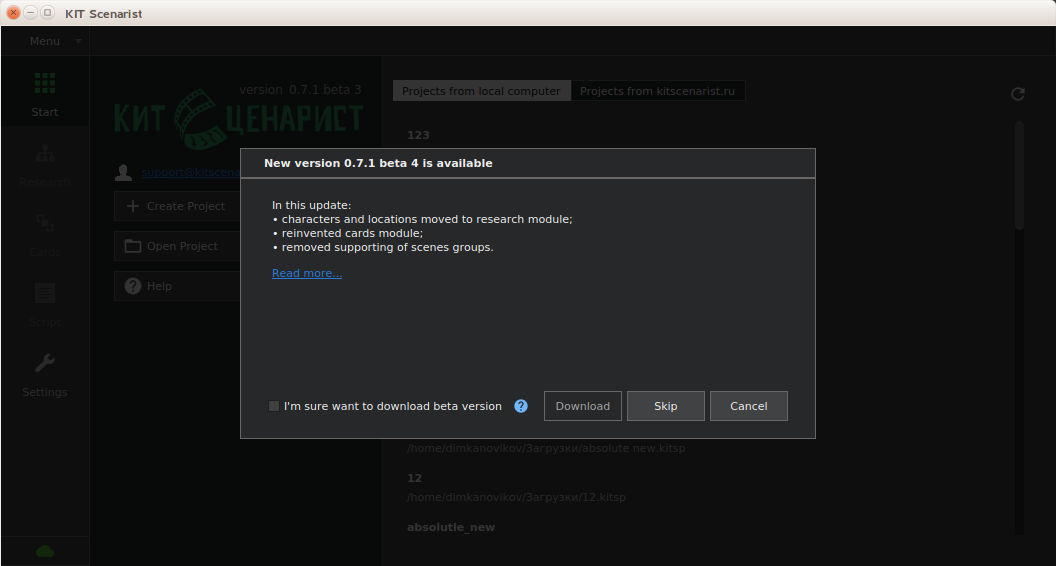 Also, we fixed a couple of shortcomings:
• improved algorithm for determining the scenes when importing *.docx-files;
• fixed a problem with the appearance of broken review comment when deleting text;
• we prepared rpm-packages for Linux.

In addition, today we are launching an open test of the cloud service. Anyone who previously registered in the cloud, you will need to change the password. For those who don't have an account, you can create a new one (it can be done directly in the program). Free access to work with the cloud will be open until May 1, 2017. On April 1, 2017, we will plan to transfer cloud service in production mode.

Read more about the cloud service:
• it allows you to store your projects in the cloud and access them directly from the program on all computers without work with any third-party service (in the future projects from the cloud can also be synced to and from the mobile version of the program);
• to projects in the cloud, you can connect the co-authors or editors, for this purposes we prepared two roles for partners: commentator and editor, with appropriate restrictions for editing text or without them;
• you can work with cloud projects both online and offline, all the changes you have made in the absence of the Internet will be synchronized when you reconnect to the Internet;
• in the cloud you have 2 GB of disk space to store own projects;
• when cloud service will work stable, access to it will operate on a subscription. Projects will be deleted from the cloud if you have not activated the subscription within 30 days from the date of its completion. During this time, (and indeed at any time), you can save a local copy of every project from the cloud.

And finally, an introductory video on how to work with the cloud service in the program:

Enjoy watching and have a nice day!:)

And here is the next beta version KIT Scenarist 0.7.1 beta 3 is published!

What do you need to do for this?
1. Add a new card to the act, which will group the other cards.
2. Call context menu of this card and select the item "Convert to folder"
3. Drag and drop your cards into the group.

And other bugs was fixed, namely:

• fixed a problem with re-editing the description of the scene in the cards;
• now the mindmaps scene will be exactly the size as you need for the scheme.

Perhaps this will be the last innovation in the current version. Next only to debug and polish the current functionality. But this does not mean that we'll stop development - no! I still have a lot of ideas on how we can improve the work with the cards, but see it in the following episode! Stay with us!;)

I want to say thank you for fast feedback and error reports. I already prepared the next beta version. It adds functional for printing cards. You can print them into Index Cards or on other paper, just specify cards count per page. 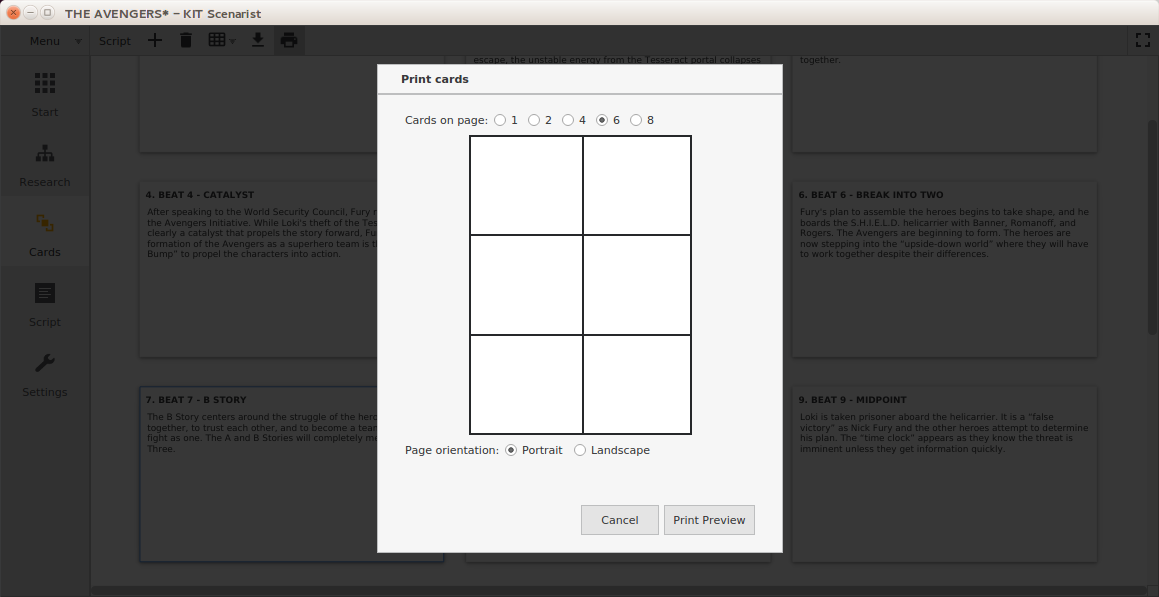 And in the second beta we fixed all critical bugs which were found in the first beta:

• fixed problems with the research module (flickering, freezing, crashing by using the context menu, and when you update the project name);
• on the card now displayed scene number;
• finally fixed the problem with the duplicate description of the scene (that sometimes also resulted in a freeze of the program);
• refined dialog for creating/editing card;
• updated translation files;
• improved drawing cards and acts;
• fixes many problems with the cards (problems with drag and drop cards into the acts, the problem with the change its titles and descriptions);
• fixed a problem transferring the text from the synopsis to outline and further work on it;
• improved algorithms for text correction (smart quotes, DOuble CApitals and other).

Thanks for the help! Tests continue! :)

We have a news - new version released today! KIT Scenarist 0.7.1 beta 1 is ready for use!

First, cards module was fully rewritten. Why do I decide to do that? because first was bad. I wanted to take other finished open source diagram editor, polish it and integrate it to Scenarist, but is was not very good... The editor itself contained a large number of errors, which were opened not at once, and, frankly, just do something great, super versatile failed. Well, we are not accustomed to give up - I thought, thought and decided that we should start with the bare minimum, gradually developing it. So I rewrote the editor of cards. Now it allows you to simply lay out the cards in sequence, grouping them into acts. When this functionality will work perfectly, I will expand it, of course, if it will be needed. 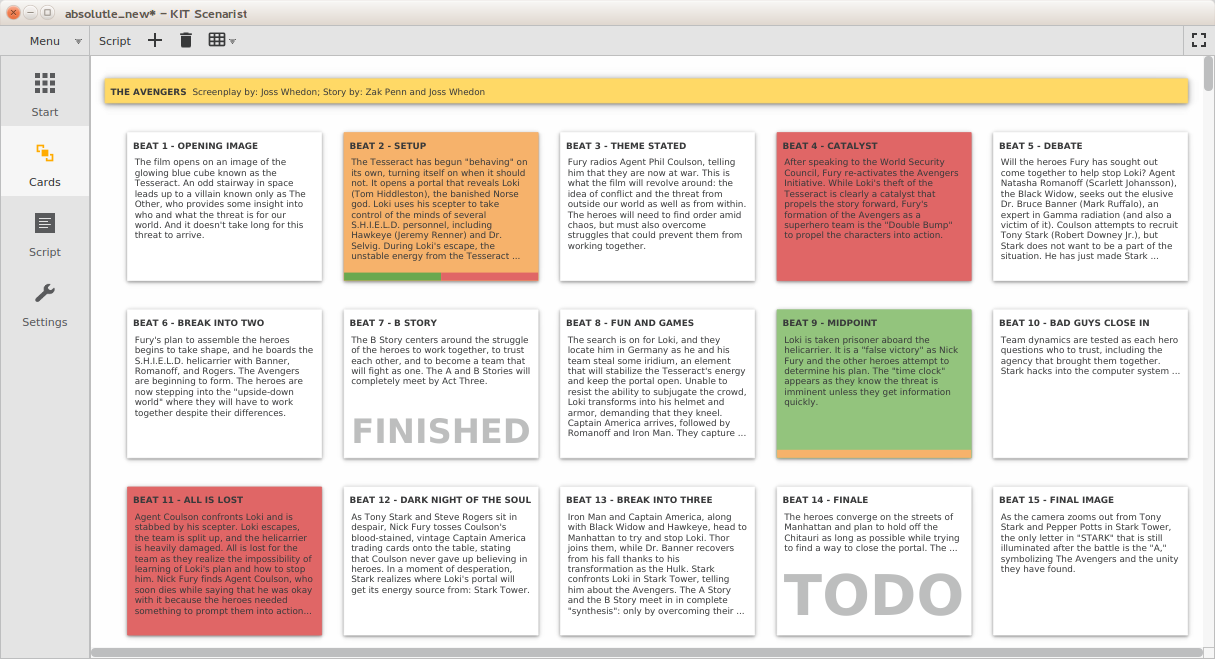 Well and thirdly a number of other, smaller improvements:

• added Ukrainian and German translations of the program;
• groups of scenes fully removed from the program. Now for the scenes grouping, you can only use the folders. Groups of scenes in the old projects will be converted to folders;
• changed the dialogue of adding new projects, and now when creating a new project, you can specify the file to be imported;
• in Mac OS X can now open multiple copies of the application, you needs to open the context menu icon in the Dock and choose "New Window" menu item;
• fixes bugs related to grouping/moving scenes and folders;
• fixed an issue with using the special characters in the title scenes;
• now the program will allow you to open projects from newer versions in the compatibility mode;
• fixed a problem with the infinite duplicating of the  description of the first scene;
• as well as minor changes in user interface.

Well, as usual, in view of the fact that this is a beta, do not forget to save a copy of the working draft, in the event that it was possible to revert to a previous version.

So far, in the future plans to develop card to a good level. Make it so that they were easy to use. In a parallel development run mobile versions of software for Android and iOS.

P.S. By the way, we started twitter! If you want to get the news out there, here we are - https://twitter.com/kitscenarist!

P.P.S. And yet, we have to actively use GitHub for tracking tasks and errors detected, if you are want to look at our inner kitchen, you can do so here - https://github.com/dimkanovikov/KITScenarist/issues. Anyway, you can report errors directly there, and when the error is fixed, system will send notification to you!;)